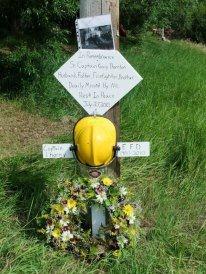 I had been looking forward to writing my column this week.

I had a fun topic, thanks to a fight for justice that took eight years and three levels of court to achieve; a true David and Goliath spectacle that ended with Goliath laying sprawled on the ground where he belongs, after having spent likely hundreds of thousands of our tax dollars.

You’ll have to wait until next week for that one. The day before my column deadline, I was hit with a far less fun topic that I felt compelled to write about.

One of my wife’s longest and best friends, Shauna, lives near Edmonton with her husband, Gary, and 10-year-old son, Payton.

Gary and I got to know each other over the years, through our wives, though our connections have been few and far between. I first got to know Gary perhaps 11 or 12 years ago when the four of us spent a weekend together to celebrate Shauna and Gary’s wedding.

Gary is an amazing guy. He’s a firefighter, in fact a fire captain, at a fire station in Edmonton, though has always held other jobs on the side as well. He’s a loving husband and the kind of dad I’m sure every 10-year old boy would want.

He describes himself accurately in the first part of his Facebook profile: “I’m a giver…not a taker! Can’t stand selfish, dishonest, lazy people.”

It’s hard to be angry with Gary, even though he’s caused a lot of emotional pain to those close to him.

He must have had the attitude that we all share to a certain extent of: It won’t happen to me, when he failed to put his seat belt on. Perhaps that comes from a career of being called to help out to save lives at countless fires, car crashes and other disasters.

He’s also the kind of guy used to pushing limits, an example being that he weathered Hells Angels scrutiny for creating a firefighter motorcycle club, the Smokeeaters, complete with club patches on their leather jackets.

Apparently, the Angels have a sensitivity around other motorcycle clubs with patches.

Speed is believed to have been a factor of Gary losing control of his vehicle in ideal driving conditions.

It was a single vehicle crash. He didn’t hurt anyone else, physically, even though his body was thrown 30 metres from the vehicle, over the heads of two municipal workers. The emotional pain started about 10 minutes later when Shauna and Payton happened upon the aftermath.

It’s hard to be angry with a man who gave so much of himself, over his 51-year life, in so many ways.

We have lost a beautiful human being, and it’s all your fault, Gary, you son of a bitch.

Please, let’s all learn from this. Let something good come from this tragedy. Yes, it CAN happen to you, to me, to your dad, so insist that everyone put their damned seat belt on and slow the hell down.

What drives me nuts is that there are so many lessons, so many crashes, so many fatalities. Why is there so little learning?

At this time of year, don’t choose urgency over safety

Posted On 26th December 2010 ~ 0 Comments
It is a time of year for counting our blessings, connecting with family and giving to those less fortunate. It is also a time for